At the milestone 700th 450SX Class Supercross Troy Lee Designs / Red Bull / GASGAS Factory Racing’s Justin Barcia grabbed the 450SX Class holeshot, but Team Honda HRC’s Ken Roczen was in the lead at the second turn when Webb took him wide, opening the door for Tomac to dart to the front of the pack. Webb turned the block pass into a second place spot with Aaron Plessinger close in third. Four minutes into the 20-minute plus one lap Main Event, Plessinger pressured then passed Webb for the runner-up spot.

While Roczen clawed his way forward after being pushed back by Webb’s block, Plessinger kept Tomac within sight. By the middle of the race Plessinger was closer to Tomac ahead of him than to Webb behind him as Webb contended with an attack from Roczen. The top four racers held their spots until a mistake by Rozcen with under six minutes on the clock, allowed Monster Energy Star Racing Yamaha’s Malcolm Stewart to pull ahead. Rozcen battled back around with under two minutes to go and the top four looked locked until a signature final-stretch pass for a spot earned Webb second place, pulling him to within only two points of the championship points lead just past the midway race of the season.

For the first time in the sport’s history, Daytona hosted the 250SX West division, and DWR Yamaha’s Jordan Bailey grabbed the holeshot. Rookie racer Rockstar Energy Husqvarna Factory Racing’s Stilez Robertson immediately took over the lead and looked smooth on what is considered one of the toughest tracks on the circuit. Manluk/Rock River Yamaha’s Alex Martin held second for the first five minutes of the 15-minute plus one lap race. Cameron McAdoo was on the move and after taking second from Martin set his sights on the rookie up front. With just under five minutes on the race clock McAdoo got into the lead and brought it home for his first ever Supercross victory and his first time leading the championship points.

The winner of the opening round of the division’s series, Monster Energy Star Racing Yamaha’s Justin Cooper, got wedged between riders and the tuff blox in the second corner and was forced to fight back from outside the top 10. The Yamaha rider seemed to make quick early progress and eventually reached fourth place with one minute left on the clock but he could not catch Troy Lee Designs / Red Bull / GASGAS Factory Racing’s Pierce Brown, who earned third place in his first race back after an ACL surgery and long recovery. 2020 Daytona winner ClubMX / IAMACOMBACK / Yamaha’s Garrett Marchbanks rounded out the top five.

The season is just past the halfway point, with eight of 17 rounds remaining. The series now heads to AT&T Stadium in Arlington, Texas for a triple header beginning on March 13th. Tickets are on sale at limited capacity, pod-style seating. To order tickets and experience the racing in-person, or for the full schedule and streaming and airing schedules on Peacock and NBCSN, please go to SupercrossLIVE.com. 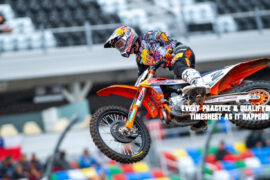 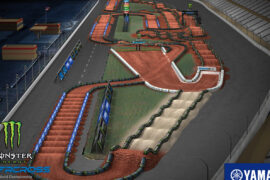